We are evaluating claims from Americans who took Zantac and have been diagnosed with Cancer. 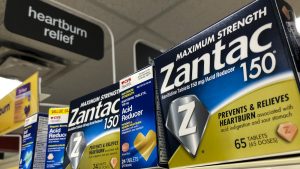 About the Zantac Lawsuit

Zantac is one of the most popular over-the-counter medications in the country, with millions of people using it to relieve heartburn symptoms and chest pain. It’s also a potential cancer risk.

The U.S. Food and Drug Administration (FDA) recently announced a recall of Zantac along with all other medications using its active ingredient, Ranitidine.

This recall follows new research that found that the Ranitidine found in Zantac was too often contaminated by N-Nitrosodimethylamine (NDMA), a chemical classified as a probable carcinogen by the FDA, the Environmental Protection Agency, and the World Health Organization.

According to the U.S. Centers for Disease Control (CDC), NDMA has been linked to a variety of diseases, including severe liver disease, liver cancer, testicular cancer, and lung cancer.

Millions of people used Zantac for years oblivious to the risks, and some users are now suffering from cancer that may have been caused by the drug. Zantac’s manufacturer, Sanofi, had a responsibility to ensure that their customers wouldn’t suffer injury from using their product, and they failed to meet that responsibility.

The investigation into NDMA contamination of Ranitidine began in 2019. After Valisure, an independent lab, found some evidence of contamination, the FDA and the sellers of Zantac announced a voluntary recall. Zantac was taken off the shelves in many places, and people were advised to stop using it until further notice.

But as the evidence mounted, the FDA was forced to issue a full recall in April 2020. Researchers observed that as the stock of Ranitidine sat in storage, the NDMA contamination only increased. The longer it sat, and the hotter the temperature it was stored in, the worse the contamination got.

At this time, we don’t know for how long this dangerous chemical has been contaminating a product that millions of people used every day. Nor do we know how many people have suffered severe health problems as a result.

Zantac’s manufacturers didn’t do enough to keep their customers safe, and they need to be held accountable for their negligence and the damage they’ve caused.

If you or a loved one was diagnosed with cancer after using Zantac, justice and compensation could be within reach. Call us today for a free consultation. You don’t pay anything unless we win your case.

What Can I Recover From a Zantac Lawsuit?

From a Zantac lawsuit, an individual could potentially win economic damages—including past and future medical bills, and lost earnings—as well as non-economic damages for losses such as mental pain and suffering. The actual compensation a plaintiff is eligible to receive depends on the specific details of their case.

How Can a Lawyer Help?

To have the best chance at being fairly compensated, you should work with a law firm that has the experience and resources needed to stand up to “Big Pharma.”

How Do I Know if I Have a Case?

If you were diagnosed with cancer after using Zantac OTC or a generic equivalent, our attorneys may be able to help you.