With summer quickly approaching, communities are opening their pools to its residents. With pools open, personal injuries due to the slippery environment will happen. What you may not know is that in many states, if you get hurt as a result of an “open and obvious danger,” you’re generally out of luck. Why? Because the property owner has no duty to warn or protect you from these hazards. It’s your responsibility to protect yourself. 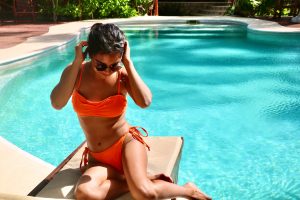 But, if you’re hurt, or seriously injured by a condition that, in retrospect, seems like it was open and obvious, you should consider talking to an attorney. It’s very likely you have legal rights and recourse. Take, for example, a recent case from Michigan. Debra Sedlecky slipped and fell (injuring herself) while entering a pool in her residential mobile home community.

Sedlecky wants the community center held responsible for her injuries. She argued that the stairs are unreasonably dangerous. She points out that the steps do not have slip-resistant treads. Nor do they have contrasting colors on the front edges, which helps make them more visible in water. She also argues that the handrail wasn’t up to code because it did not extended the length of the stairs.

The decision, sort of

A trial judge agreed with the community center and dismissed the case. But, the Michigan Court of Appeals reversed the decision. It concluded that Sedlecky provided enough proof that the stairs were in violation of state safety laws and codes, and stressed that the stairs might have become noncompliant by the time of Sedlecky’s fall. The court also said the video didn’t make it clear if the plaintiff’s knee gave out, as the community argued, or if she slipped.

Now Sedlecky gets a chance to have a jury determine whether the community center should compensate her for her injuries.

Here is a copy of the appeal.